I’ve loved doing these summary posts every year with my Apple Watch. Even though this is only the 3rd one, I feel like I’ve improved a ton, and figuring out what I’ve focused on over the last year helps me gauge what I’m doing well at and what I may need to improve.

Let’s start with the repeats:

This last year, more than others, I’ve been more interested and intrigued into doing various workouts. I’ve still kept my move streak, and all 3 ring streak, going since I wrote my post last year.

Nearly at the end of summer, I got my first real road bike, and got better at going faster and longer distances. I got to a point where, at the highest, I was cycling about 120 miles+ a week. I was able to, when the weather was right, cycle 15 to 25 miles every day before even getting into work. That led to easily closing my move goal, and having the Apple Watch bump it up to 1110 calories. A day. Which was awesome. 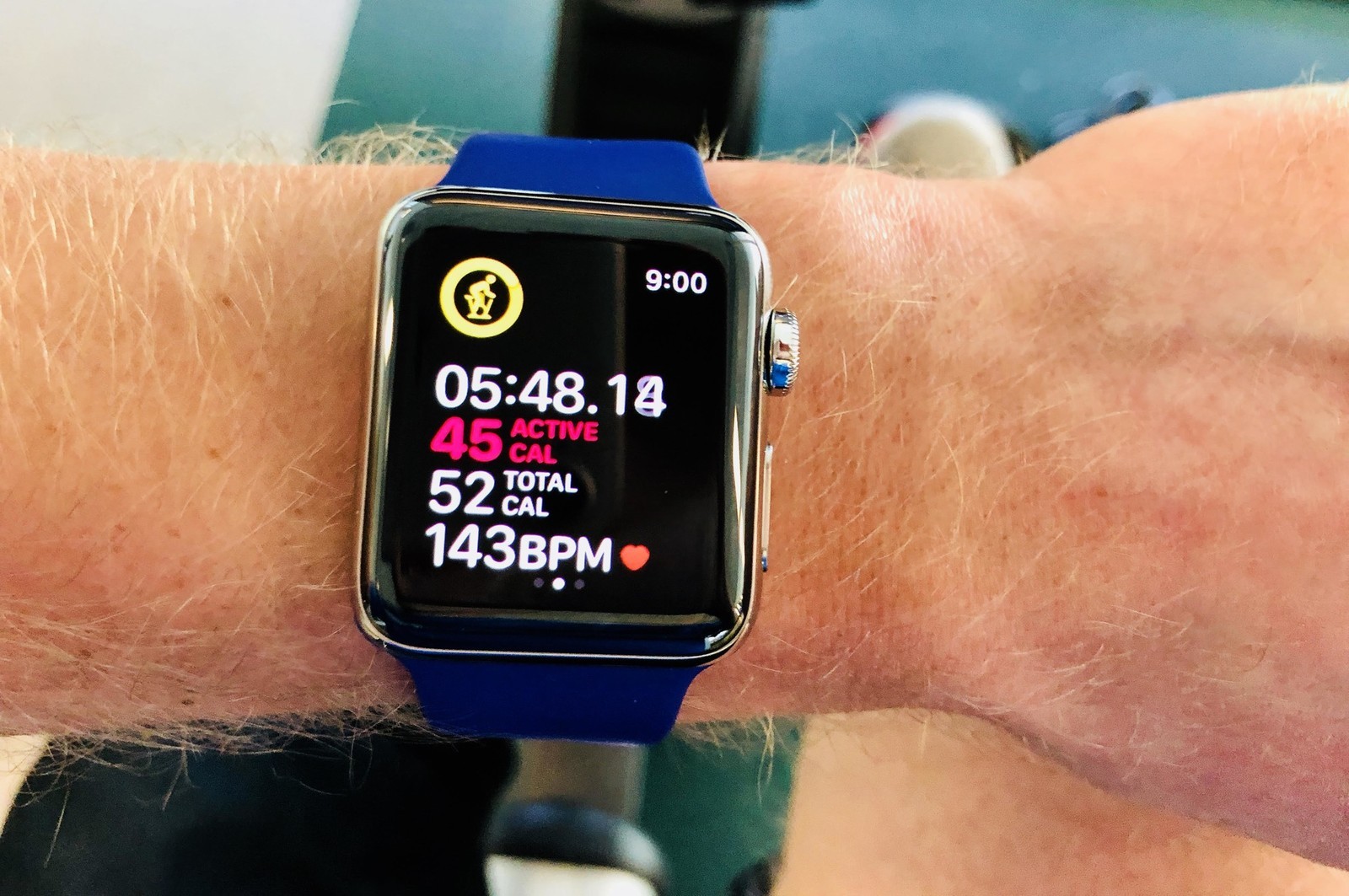 I kept that calorie goal up through December, even into some freezing temperatures, and, when it got too cold to bike outdoors before work and easily smash it, I went to the gym at work twice a day - once in the morning, and a second time at lunch. Usually switching back and forth between the cycling machine and elliptical.

Midway through December though, there wasn’t any feasible way [especially with a foot of snow on the ground] to keep that goal up, so I switched to a 700 calorie goal. It was what my goal had been about a year ago at that time, and since it takes me ~ cycling 16 miles, or running 9 miles, to hit, I still felt like it was a reasonable goal to maintain. All throughout this, I also kept my stand and exercise goals closed.

Starting this year, I was lucky enough to have a co worker who is really really into strength training. And while the Apple Watch doesn’t really have a comprehensive way to track that, it still has an option to. So I switched to doing cardio in the mornings, and weight training at lunch.

Another thing I started to do is swim - I felt like, after learning more and more about the swimming capabilities of the watch, it was a waste to have access to a pool [not Olympic by any means, but like 50 yards away from my office] and not use the swimming workout. So I started doing that. 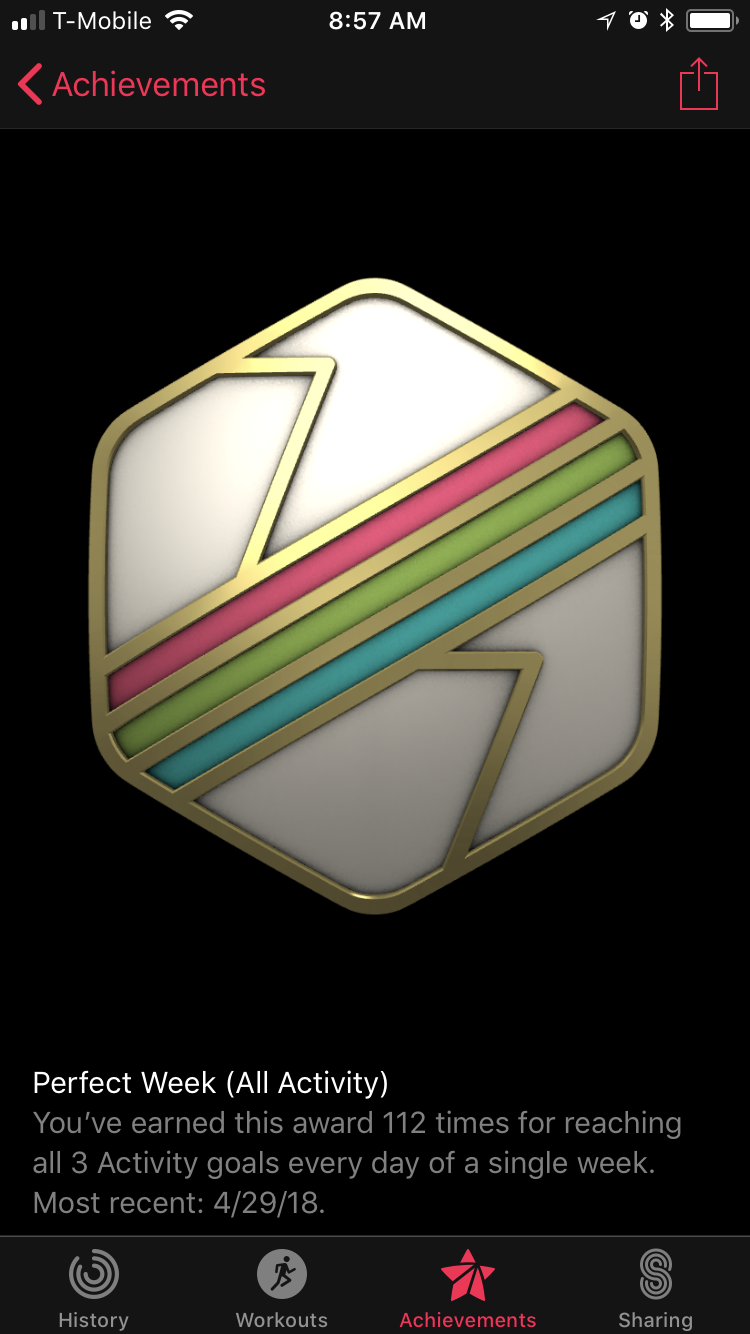 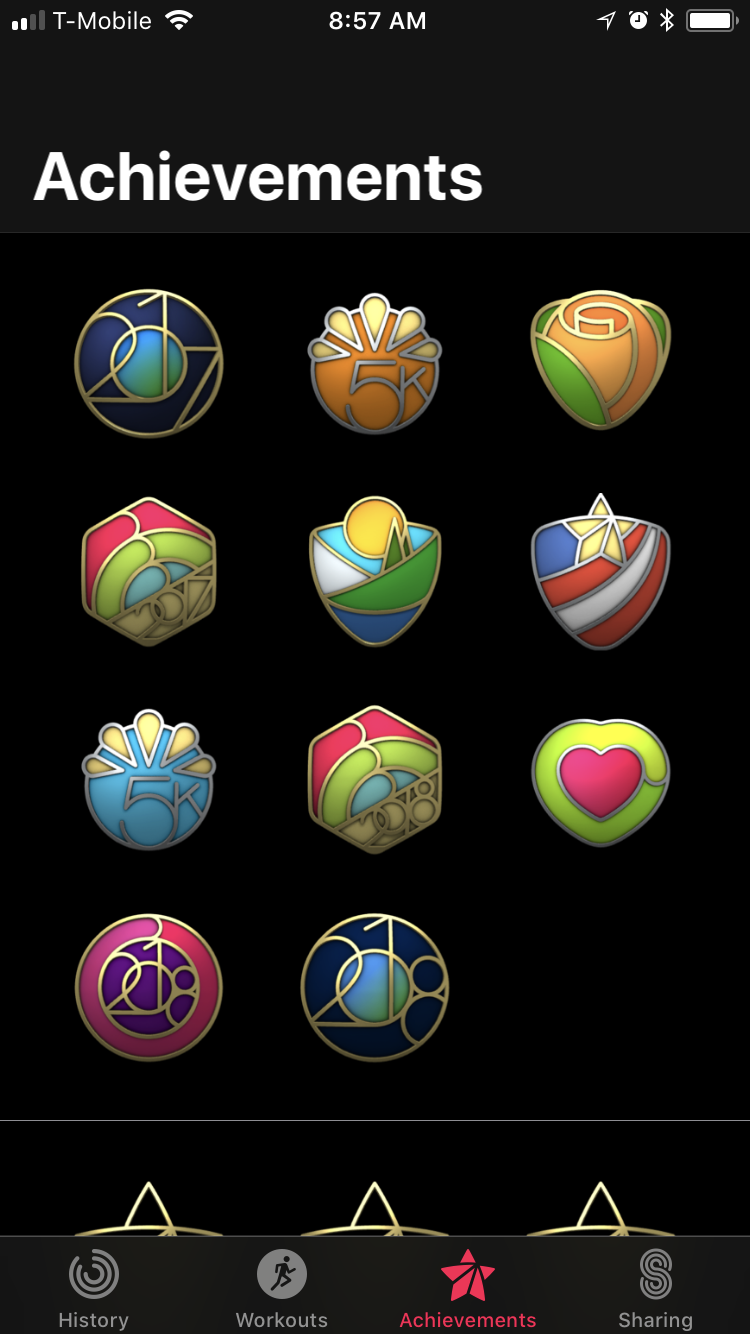 As I come to the end of year 3 with my watch, I can’t help but feel even better, and even more motivated, to continue working into a healthy lifestyle, complimented by pursuing new fitness hobbies, and continuing my goal of exercising no matter when and where I am. Whether it is that pushups at midnight, running around the house and making my parents think I’m crazy, or working out at 4 am because I’m about to get on a 9 hour flight and I want my stand goal closed before than and want to not have to baby my rings throughout a long transpacific flight, I’m doing it. I’m still finding more and more ways to keep my 600+ 3 ring, and 700+ move ring, streak going. And I have the Apple Watch to thank for that.

In truly momentous news, I hit my daily Move goal for the 1,000th time on my #AppleWatch. pic.twitter.com/zEZYTYHE1l

In watchOS 4, for some reason, breathe notifications use a series of witchcraft and undocumented mysteriousness to maybe sometimes eventually send you notifications.

I’ve found this to never be the case and be quite awful in practice. In that, I never freaking get notified.

My solution, until September, is to make a notification setting in the Streaks app.

Streaks is this awesome app that can remind you do a bunch of things, and keep up 'streaks'. What's awesome is Streaks integrates directly with HealthKit. Which means, if you do whatever item you want to accomplish (say, 5 breathing minutes), Streaks will notify you and automatically mark the task as complete!

So basically, it's a great habit maker without all the glitchiness of notifications of DeepBreathing on watchOS 4. 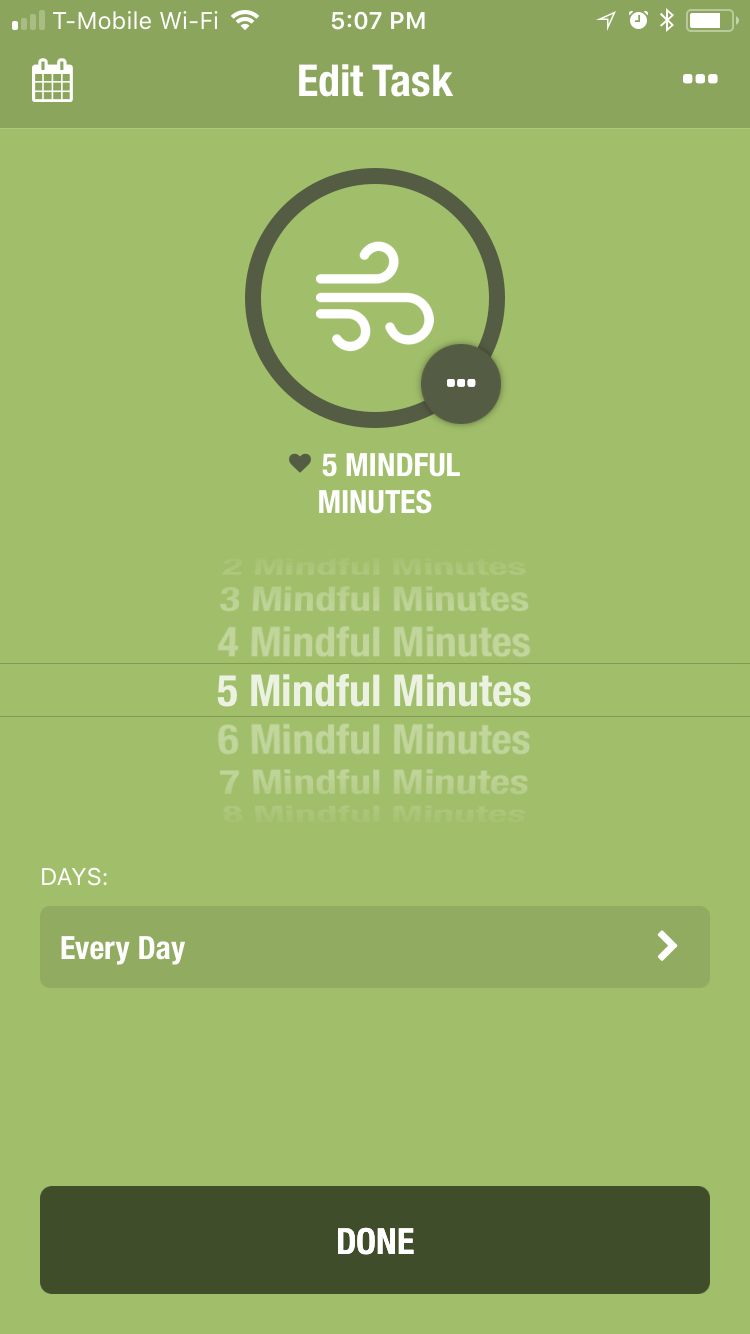 The first setting is simple enough - make a streak that encourages me to do at least 5 breathing sessions every day. 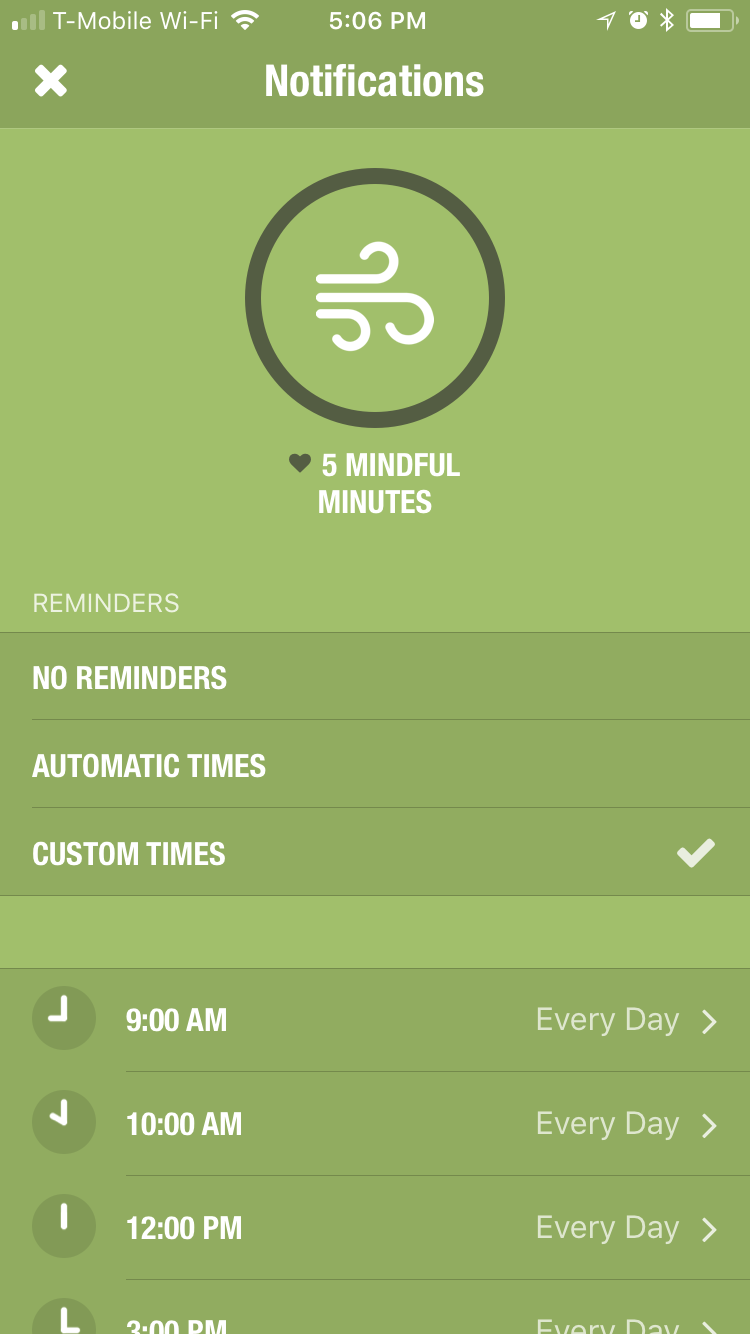 Second, you can edit the specific notification times by going into the top bar, taping the sideways … ellipsis, and then scrolling down. By default it only notifies you around the end of the day if you haven't done the task you've set out to do. 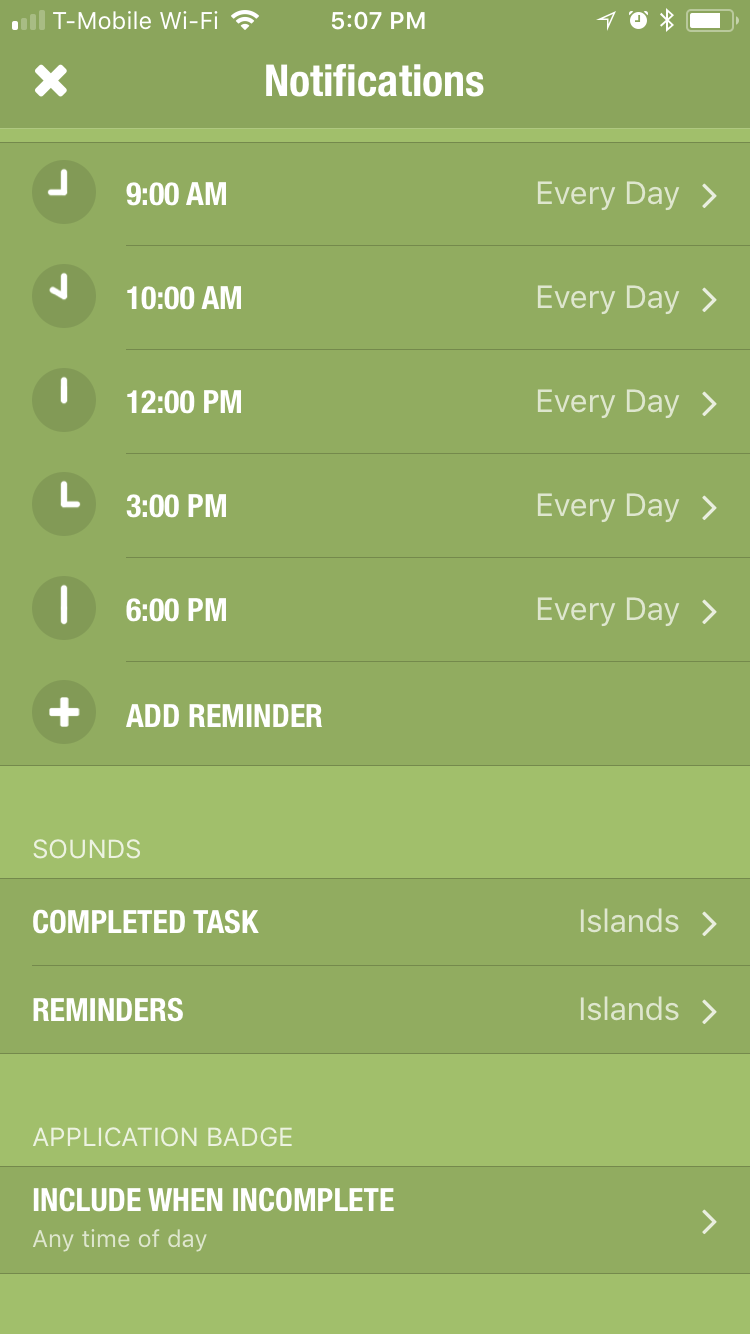 Lastly, I have custom times set so that I remember throughout the day, rather than at the end of the day, so I remember to Breathe.

Anyways, here's my setup. I honestly really like the breathing stuff in watchOS, but get frustrated when it just doesn't work.

January started with me wanting to actually utilize two things - the awesome swim workout mode on the Apple Watch, AND the pool at my gym. 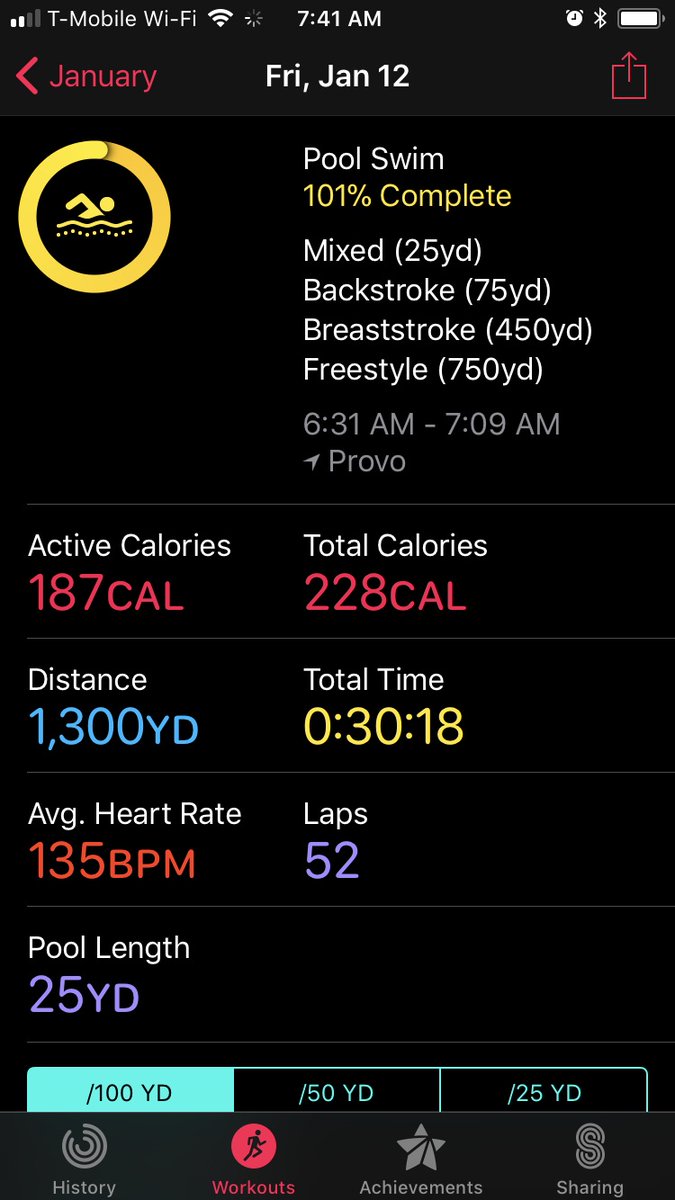 That first workout, I didn't really even know how to think of yardage with a pool, and because my pool happens to be not-so-standard, I just wrongfully assumed it was... 25 yards.

So that was really an 800 yard workout.

But after some discussion and further measurement/guesstimation/Kyle-just-bring-a-tape-measure, I settled on thinking it was more in the range of 21 yards. 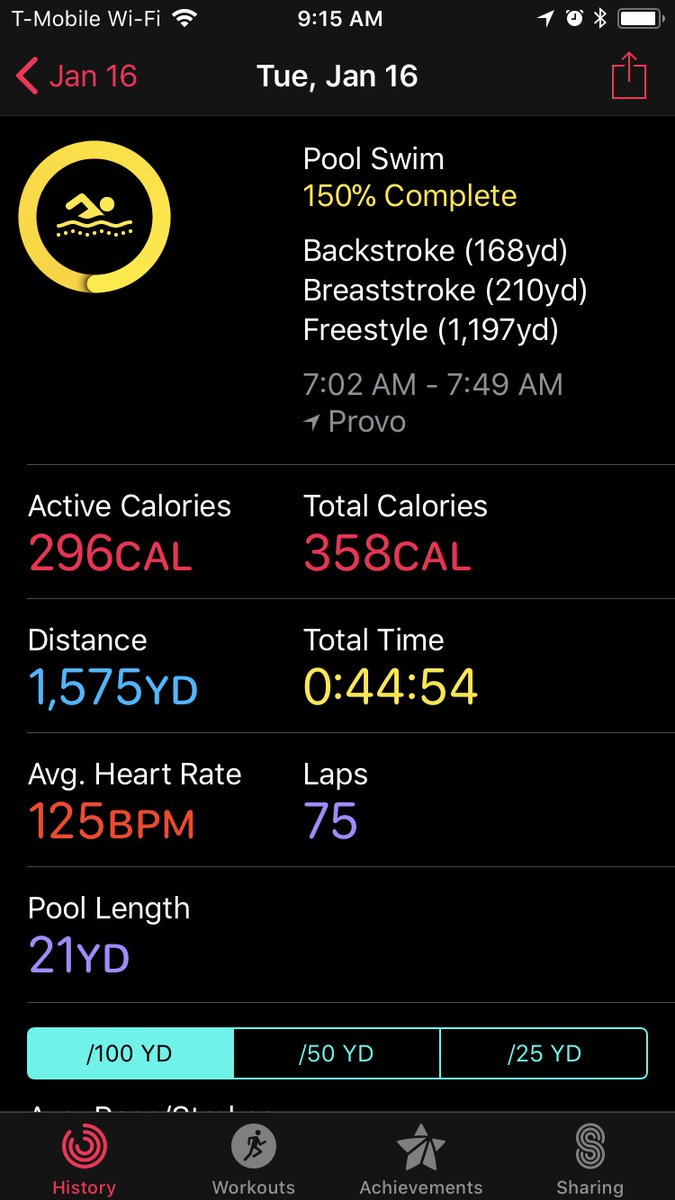 Turns out, after a solid month and a half of workouts, that was wrong as well.

The pool's actual measurement? 47 feet long, ~15.66 yards. Not 21, and definitely not 25 yards. I'm pretty upset with myself for not measuring WAY earlier. And while it would be great to find a better local pool, nothing is better than one that is literally 50 yards away from my office. [Who knows if that yardage is right 😝]

Despite feeling behind, I definitely have already improved, and average about 80 to 90 laps per workout. And despite that being 1,200 yards, rather than the 1,680 I thought it was, the only way to go from here is going further and longer.

It'll be interesting to see what my Apple Watch thinks of my sudden drop in pace starting next week. And how the caloric estimates differ - Wolfram says it's about a 30 calorie difference, but we'll have to see.

Two years of cycling a lot.

Figuring out different ways to do cardio.

Trying running bit by bit, never going more than 5 or so miles.

Doing different ellipticals, from super nice LifeFitness gear to crap ellipticals that my dad got on Craigslist for like $30.

Hiking 15 miles to close my rings because I couldn't bike that day, and I didn't want to run or get injured. 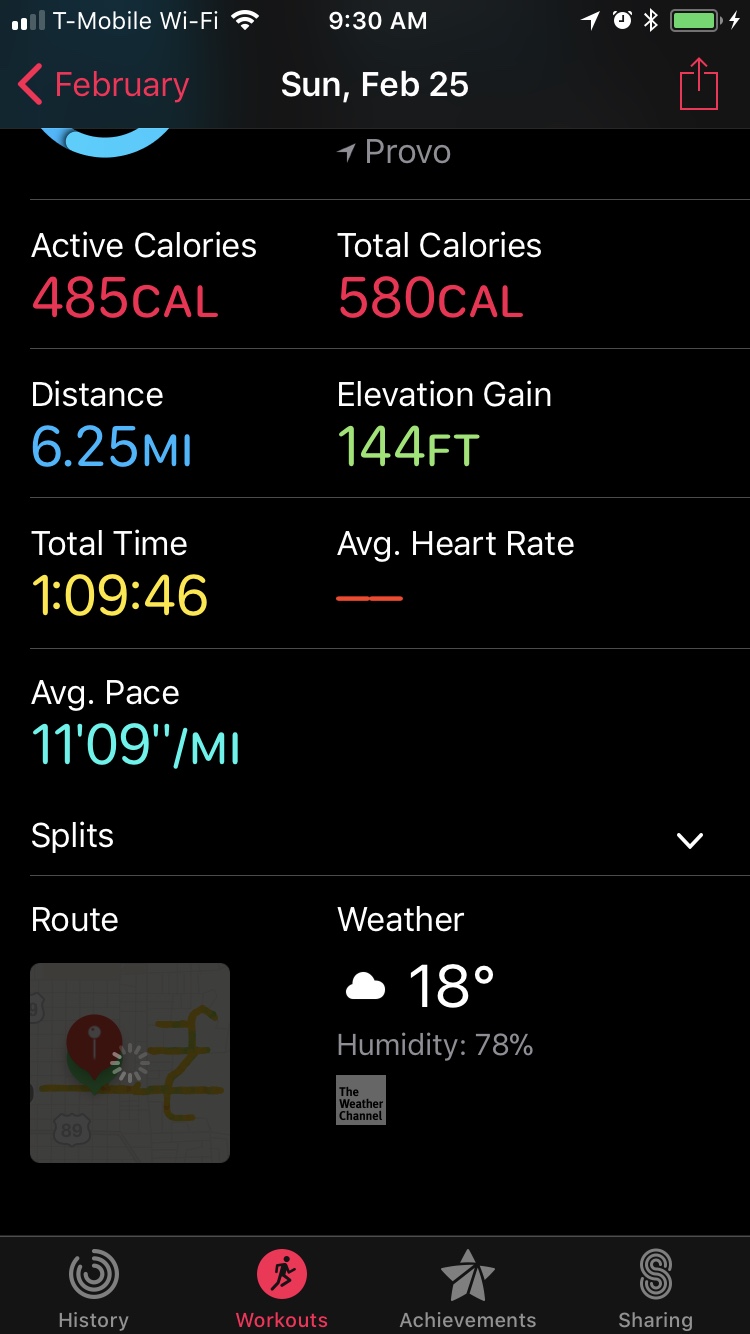 Remember that New Years award for the Apple Watch? Remember how a bunch of people got it earlier than they should've?

Turns out™, the badge didn't get a date associated with it.

Here's the condition the original 2017 New Year's badge had for you to earn it:

The 2018 award on the other hand had its condition set to:

Which means it'll just throw it at you after you earn any perfect week after the badge was downloaded, which was on Dec 27, 2016 at 5:00:00 PM. So anyone getting their perfect week on the 28th, like me and many others , got the New Year's Badge way too early.

What it should've had is AND dates.startOfToday >= 536716800, which would've prevented the super early award winning by many.

My only question is why did it not have the date condition?

On a similar note, it looks like the Heart Month award coming later this week should be fine, since it's marked as available after the 6th, and just has two queries: activityData.history.consecutiveExerciseGoalsMet >= 7 AND dates.dayOfMonthToday == 14 - 7 days in a row of meeting your Exercise Goal, earned on the 14th day of the month.

One of my goals this upcoming year is to get back into running. It's one of my favorite ways to work out still - you don't need any equipment besides shoes, and maybe music to listen to.

I am currently sticking to one of the Strava Running Plans to ease myself back into running at a reasonable pace. While I know I'm starting a lot slower than I used to, I'm also very aware of how last time I was training, I got injured because I went too fast and far way too quickly.

Current Pace vs. Two Years Ago 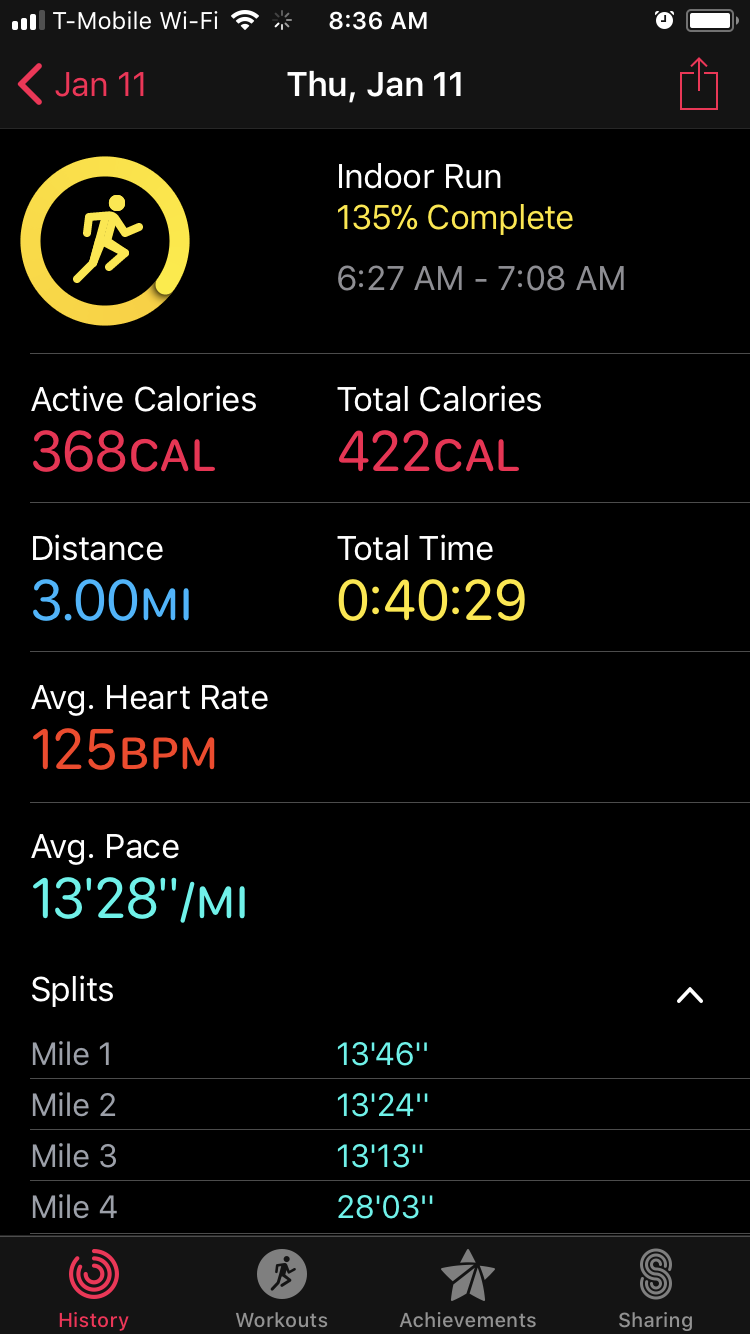 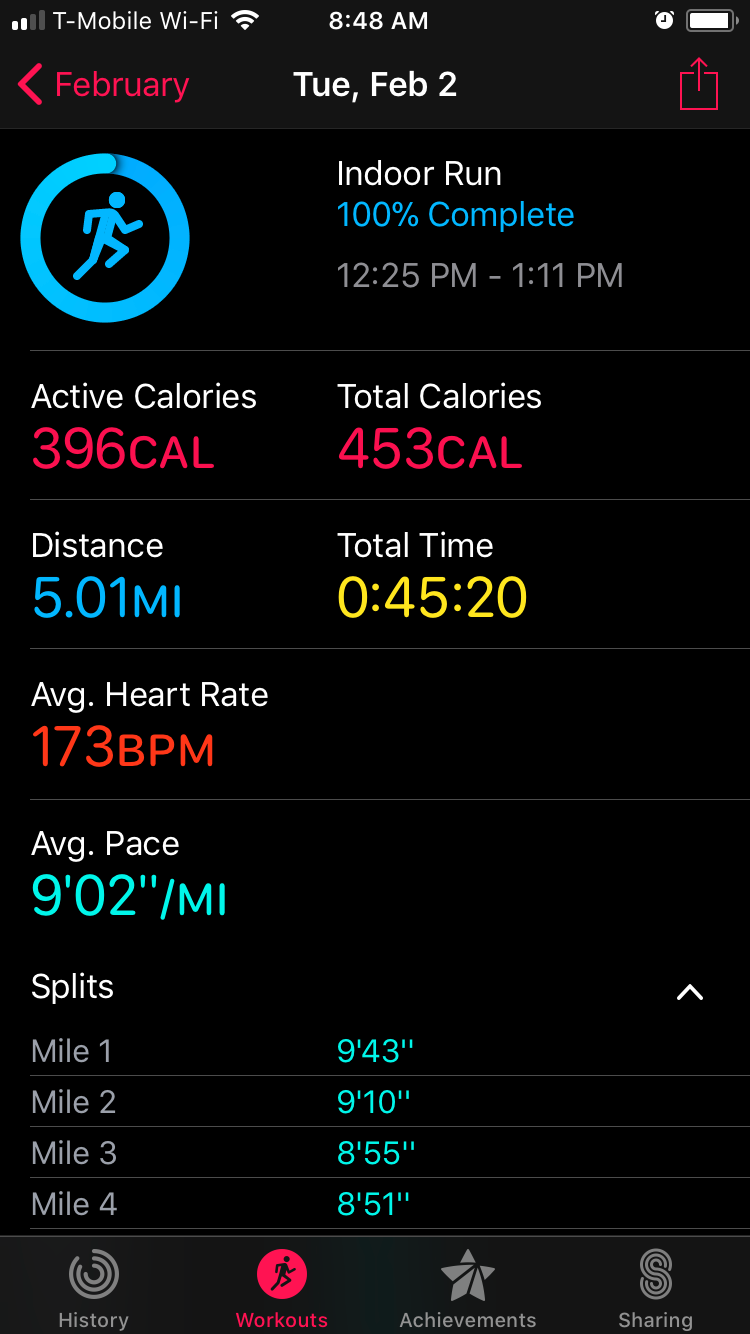 Currently, I'm at a slowish pace - around 12:30 a mile depending on the day - but it's a pace I can keep constant for 45 minutes without any run walks in between. Another thing that I'm focusing on is actually doing my speed intervals, aka fartlek runs, to build up my speed slowly over time.

I think I'll be able to run a half marathon some time this year depending on how my training goes, and I'm also considering a few triathlons.

While I've loved cycling over the past two years, it's nice to get back to "basics", and just have nothing but a nice trail, my running shoes, and favorites jams while enjoying what Utah's outdoors has to offer.